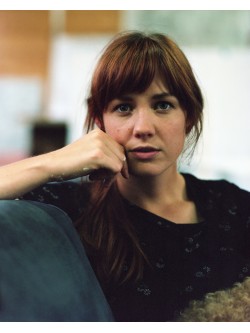 Caitlin Connolly is an artist and wife to a guitarist. Born and raised in Utah, the only girl in a family with three brothers, Caitlin grew up coloring the walls with crayons while becoming well acquainted with boy scouts and power tools.

She graduated from the University of Utah in 2009 with a BFA emphasizing Painting and Drawing and has been passionately pursing and cultivating her creative path since that time. She now lives in Provo, UT with her curly haired husband and almost-as-curly haired miniature dog, Albus. She loves spending time in her studio, touring on the road with her husband, journaling, song writing, and watching a good TV show.

“I make art founded on the human experience. Life, death, tragedy, joy, loneliness, spirituality, and progression are concepts central to how I view this experience. Growing up in a family with all boys, it was difficult for me to identify with women. My work often explores the feminine experience as I attempt to understand myself and all women more fully and view them the way I see them – powerful yet flawed.”