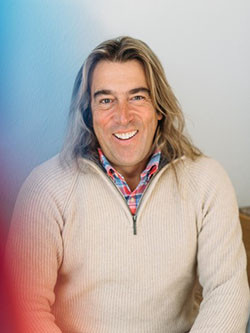 Disciplined, dedicated and in love with the West.

Meet Topher Straus, an artist who has created an entirely new medium to capture nature’s grandeur—America’s pristine national parks from coast to coast, and much more. Gifted with an Impressionist’s eye, Straus constructs evocative imagery through color and line while visually traversing his landscapes with a digital “brush’. By working on a grand scale, he takes the viewer into a fresh realm of artistic experience.

Born in Colorado in 1974, Straus descends from Western pioneer roots and a family with a deep commitment to the arts. He was exposed at a young age to contemporary masterworks through their museum-worthy collections and developed an inimitable style as he processed his own inner world on canvas.

Straus graduated from Syracuse University with a BFA in Film Art, then went on to pursue the dream of working under Academy Award-winning filmmaker Robert Altman, investing a decade in Hollywood and personally directing several narrative and documentary films. Following a move to New Zealand, and the addition of a son to a growing family, Straus returned to Colorado to focus on his own transformative view of the world. Initial collector response often included the urge to touch his paintings, presenting the challenge of touch-resistant surfaces. While honing a newfound painting technique via digital tools, he discovered the process of sublimation whereby images could be affixed to a metal surface and sealed, completely protected. Straus’s first solo exhibition in Denver in 2018, “The Parks”, proved that the art world was ready for what he had to offer Among the successful sales and significant results was an invitation from the Department of the Interior to display  his painting “Tetons” at the Grand Teton’s National Park Visitor Center through 2042.

At home near Denver, Colorado, Straus’s mountainside studio embraces the very wilderness he craves. Looking ahead, he intends to complete images of all the American national parks, as well as explore the stunning drama of the West’s varied mountain ski slopes, a subject already receiving enthusiastic acclaim. He is committed to creating up to three new pieces a month; a singular original and 25 limited editions. When these sell out, the edition is closed.

Straus has exhibited in galleries, institutions, museums and private collections throughout the U.S. and overseas. In Colorado he is currently featured at the Marriot Luxury Collection’s Hythe Hotel in Vail with eight works on display. The renowned Vail International Gallery handles representation in Vail and the Breckenridge Gallery recently launched a solo exhibition space for his work. Straus boasts 60,000+ followers on Instagram, crossing international boundaries. At the core of his success is the artist’s unbounded interest in others and his heartfelt generosity, expressed through philanthropy to non-profits in the areas of food insecurity, art education, and conservation. Since 2019, he has proudly donated over $50,000 to those in need. For Topher Straus, his artistic passion clearly sustains humanity in more ways than one.