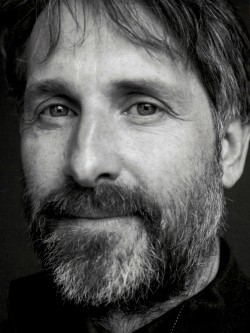 Brian T. Kershisnik was born the fourth and last son of excellent parents. Because of his father's employment as a petroleum geologist, he grew up in Luanda Angola, Bangkok Thailand, Conroe Texas, and Islamabad Pakistan. He graduated from high school early, not because of sterling merit, but because the American Embassy in Islamabad Pakistan was burned and he was evacuated and the seniors graduated.

After a year of college at the University of Utah searching in vain for vocation, he served for a time as a missionary for The Church of Jesus Christ of Latter-day Saints in Denmark. He returned to the USA to study art at Brigham Young University, during which studies he received a grant to study in London for six months. He now lives in Salt Lake with his wife and dog.

"Because I work from a broad agenda, which I have never satisfactorily described or defined, I continue to have difficulty with the frequent question, 'Oh, what do you paint?' Can I answer that I paint my hunches? This is to say that I get a hunch about something and I pursue it (or them, usually simultaneously) until I either understand why I was drawn to it and how it matters to me, or I decide it is an anemic or stupid idea and abandon it. Since much of this deciphering happens in retrospect, there are usually ideas in progress about which I am unsure. This is a problem if one is concerned about looking foolish, which I am, and so I would rather point out the certain bravery that working in this fashion entails. I have come to realize that I do not have paintings teetering on the edge of the stupid, I am playing it safe, for as often as not, a very late decision will rescue a painting wonderfully" Kershisnik's graceful and direct paintings are eloquent narratives about the human condition. Although his work seems quite simply composed, his astonishing ability is the result of decades of struggle with oil paint and with the human psyche."