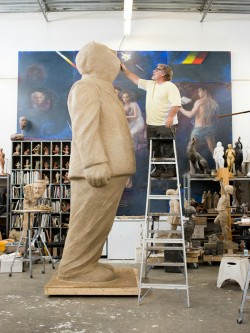 Jim Rennert was born in 1958, and grew up in Las Vegas, Nevada. After 10 years of working in business Jim started sculpting in 1990. He had his first bronze sculptures cast by a foundry in Lehi, Utah in 1992. Jim began exhibiting his work in commercial galleries in 1993. Working closely with the foundry in Lehi, Jim learned to execute all aspects of the lost wax method of casting bronze.

Jim's work is figurative, emphasizing movement and action. He has created many pieces depicting athletic subjects and themes. In 2004, combining his business background with his enthusiasm for sports, Jim began the series titled "Suits". This series uses sports as a metaphor to explore the competitive nature of business. "Business has become for many the sport of a lifetime," Jim says. Looking at various aspects of business life, Jim presents the contemporary businessman's daily struggle with himself and others in an ironic and humorous fashion.