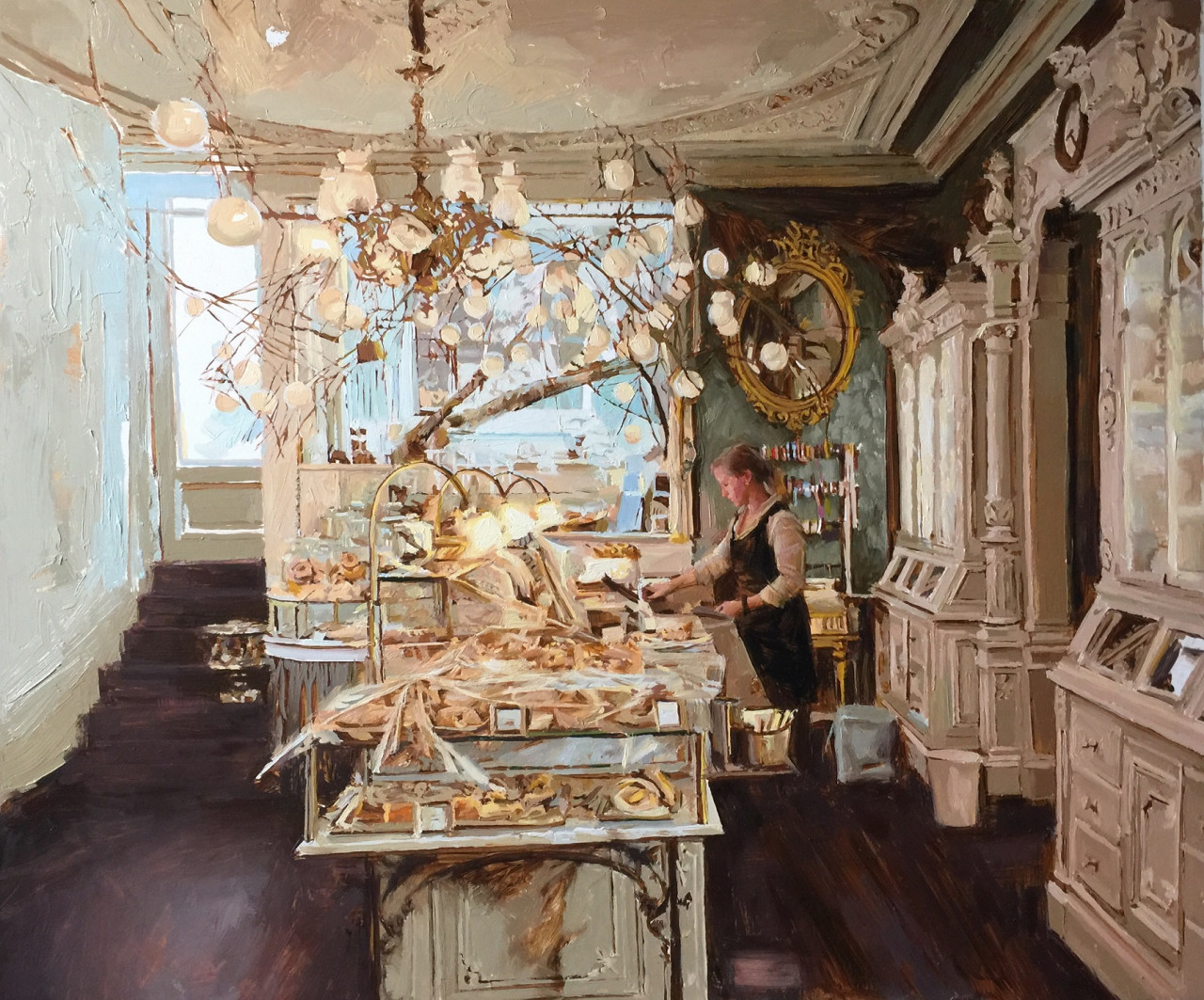 “I’m interested in capturing things that really speak to this idea of beauty,” says Sauer. “And in a lot of cases things that are fleeting and don’t last forever.” Sauer’s portraits are typically of women and children; her own experience as a new mother witnessing the constant change in her young daughter readily informs her work. For her solitary female figures, Sauer references fashion photography in the way she uses light, posture and dress to compose an image rather than attempt to reveal the character of the sitter. She evokes nostalgia through her subject’s vintage clothing and backdrop speaking to the ephemerality of time as well as beauty. For Remnants, Sauer takes this concept beyond the figure with paintings of deserted interiors and historic storefronts that symbolize our rapidly changing culture. Many of Sauer’s interiors were inspired by a visit to Bodie State Historic Park in California, a preserved ghost town from the gold mining era that stands as evidence of times past. “These disappearing places deserve to be captured, preserved and remembered,” says the artist.

Sauer currently lives and works near Salt Lake City, Utah. Her paintings have been exhibited throughout the United States from Park City to Boston to New York. She’s been a five-time finalist in the Portrait Society of America International Portrait Competition, most recently in 2018, and was awarded Best of Show in 2012. She also received the Art Renewal Center Realism Award of Excellence at the Oil Painters of America National Juried Exhibition in 2017. She has been featured on the cover of American Art Collector Magazine and in the annual “21 under 31” feature in Southwest Art Magazine.

Meyer Gallery, owned by Susan Meyer, was established in 1965 by Darrell and Gerry Meyer. Since it’s foundation as one of Park City’s premier art galleries, Meyer Gallery has grown to become one of Utah’s leading contemporary art icons. Located at 305 Main Street in an 1890 Historic Landmark Building, the gallery is committed to showcasing Utah’s exciting emerging talent as well as mid-career to established artists from across the region. Gallery artists work in a variety of mediums and styles, from contemporary realism to abstraction.